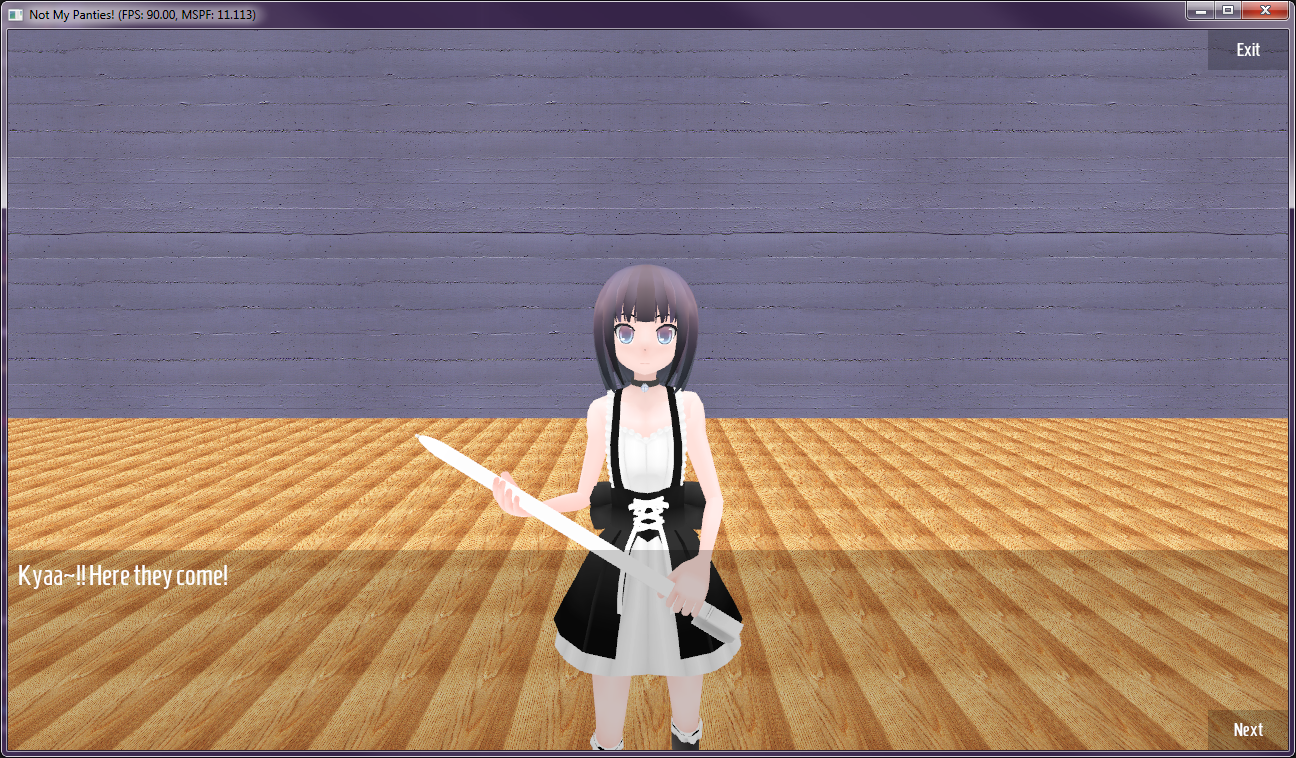 With commitment to the jam, we needed to work out exactly what sort of game we were going to make. Since it was our first jam, we decided on taking the easy route and making a turn-based battle system. I had made one of these before for a different game, so it was minimal effort to recreate it for LD. To add a little bit of depth to the game, we decided to go with a visual novel style for the story screen. Now that we had a fully mapped out plan, we got to work.

I started working on the battle system while Colby gathered up some 3D models we had kicking around and added a basic-but-working skeletal rig to our character model. By the end of the first day, we had the basic skeleton of gameplay working, a basic UI, and some little things like circle shadows for our models. We ended up spending most of day one fighting with our tools. Ludum Dare was a real test for various tools we’ve been in the process of making and it was quite sobering to see just how awful they were. 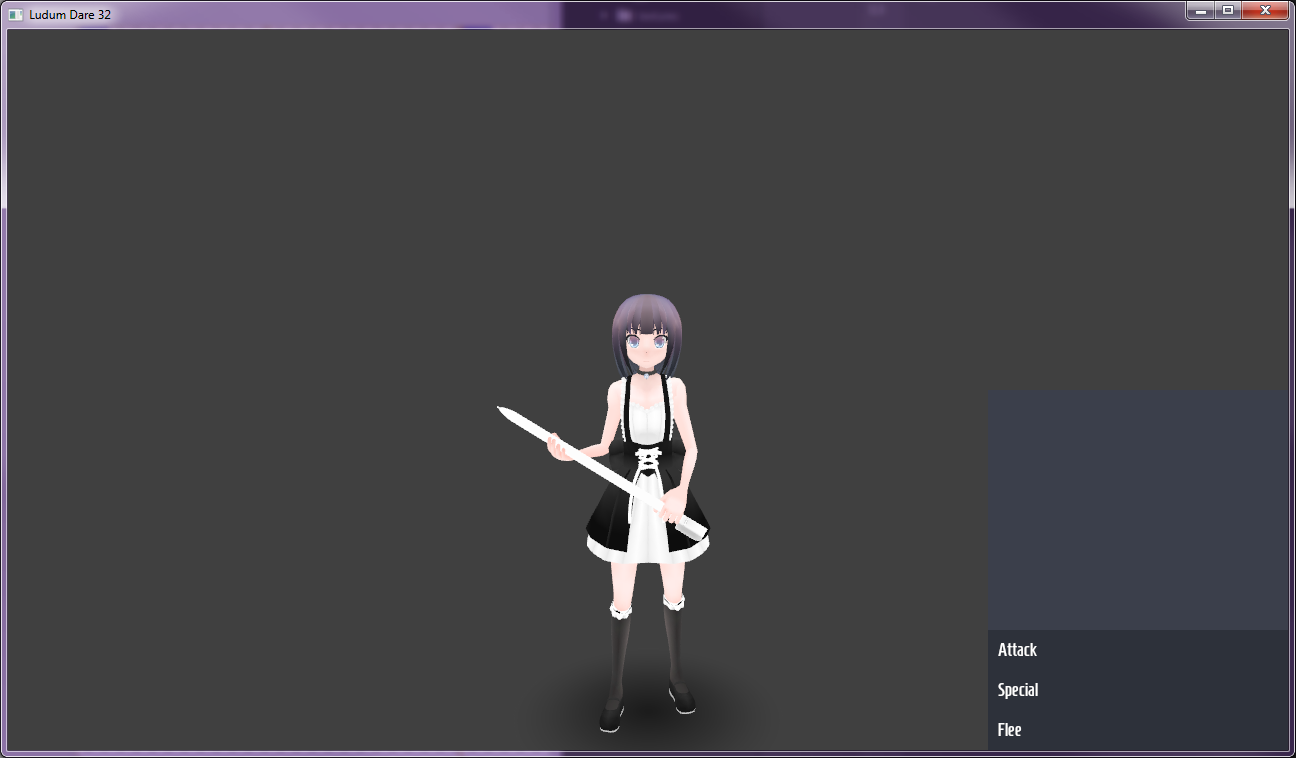 Day two was a difficult day for morale. I started to get the feeling that we weren’t going to be able to make a game in time with so much we needed to do, but I pressed on anyway as not to disappoint my partner in crime. A breakthrough occurred when we linked the battle system with visuals and had a VERY basic animation. The game instantly felt more alive, more real, and more possible. I decided that we really could get it done, and my morale was refilled!

At some point throughout the day, I had the brilliant idea that we should have our main character voiced. I started poking some of my friends and ended up deciding to “hire” Nadja, a German gal with a British accent. I wrote up a quick script of about 15 lines and had her do several takes of each line. While Colby worked on the visual novel side of the game, I spent time editing our new vocal tracks. By the end of day two, our battle system was fully up and running and our story mode worked, too! 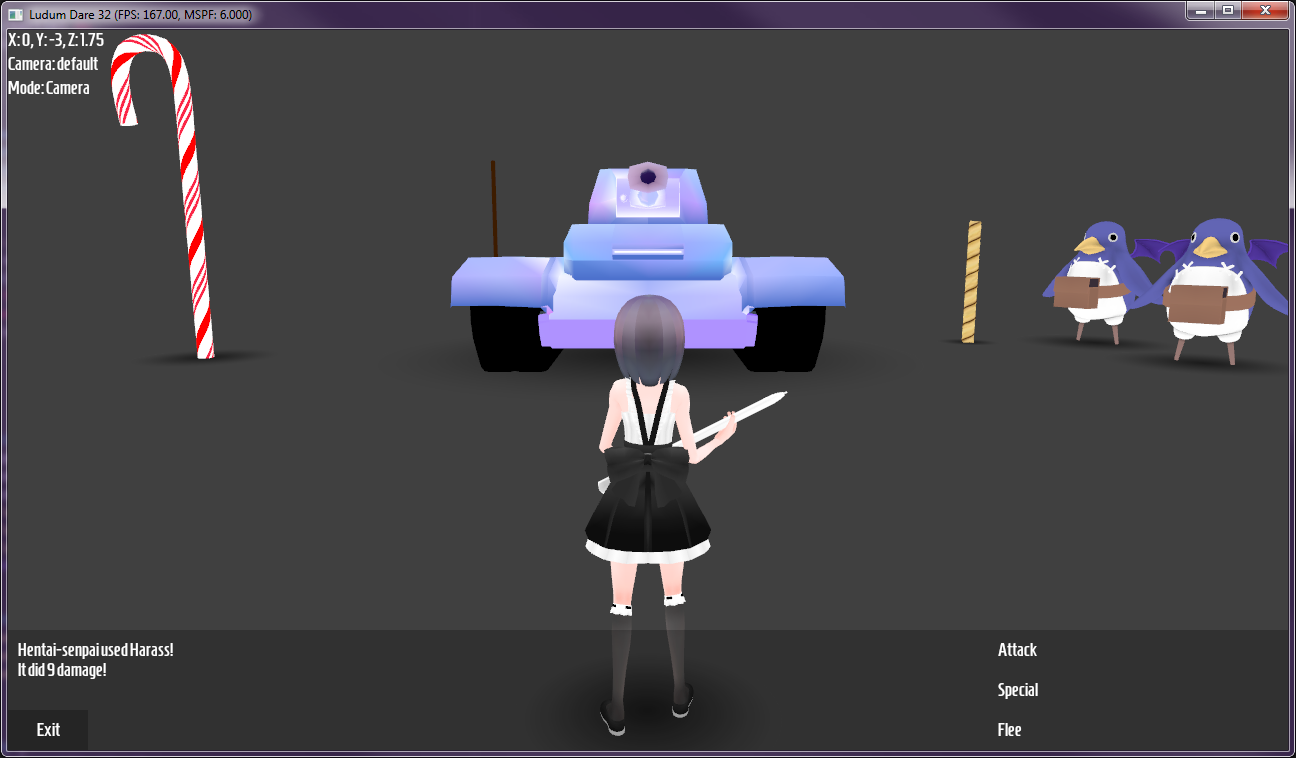 Day three was separated into two shorter days with sleep in the middle. Both myself and Colby had obligations we needed to take care of, so we planned our sleep around them. We added nameplates (health bars, etc) to the battle screen, more animations, and cloned a generic female model, flattened the breasts, and added a few manly proportions to it for our enemy. Time was getting especially tight and we needed to start doing “anything” instead of “the right thing” for our assets. This ended up making the game more hilarious due to the lack of polish.

We finally added a win/lose scenario and included the vocal tracks into the game. The vocal tracks really brought the character to life and we were extremely pleased with how this turned out on such short notice. Making the game actually winnable also helped a lot, it felt like a real game by this point, and all that was left was polish. 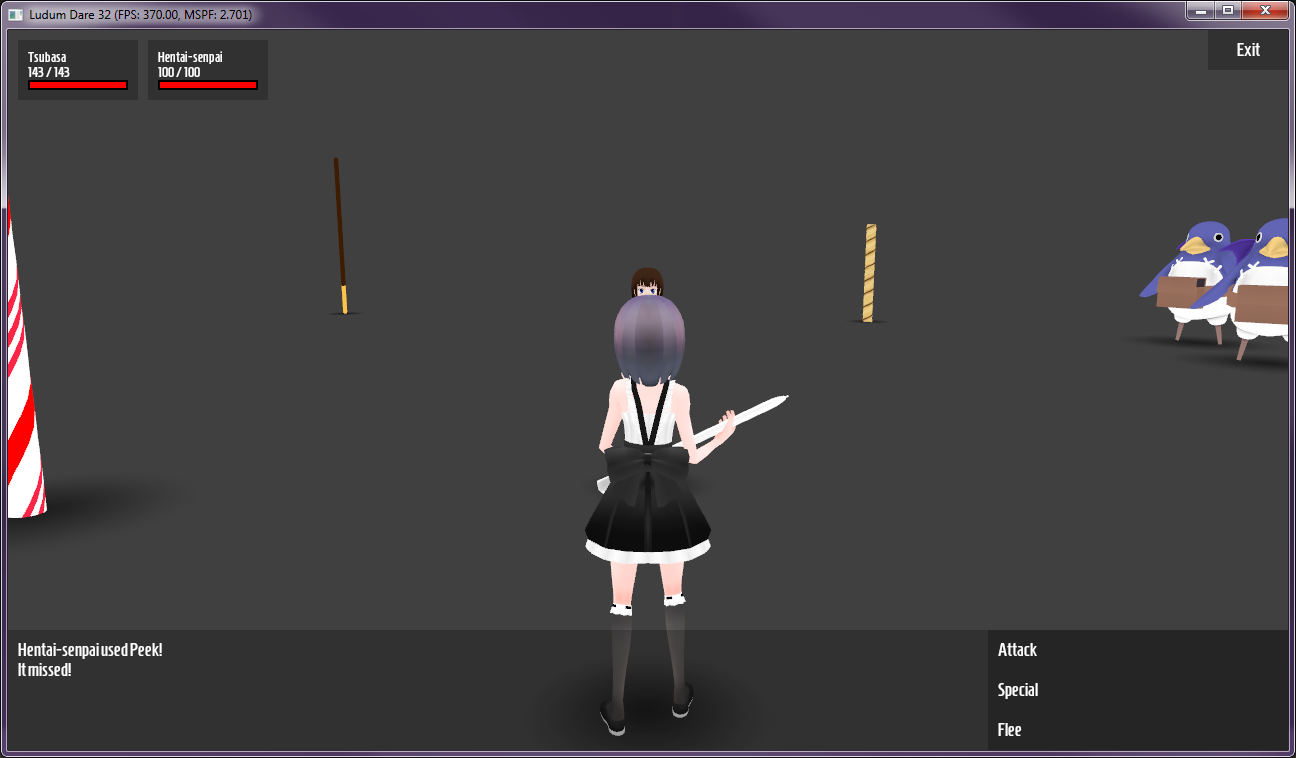 Day “four” was a hilarious rush to the end. While Colby was still out taking care of business, I spent some time creating a very simple stage, improving camera angles, and touching up a few UI issues. We had a mad sprint in the final hour where basically all of our animations were thrown together, which turned out GREAT! The dive animation had me floored for a good few minutes, as did the enemy flings. We ended up expanding the game by adding a few more enemies, which were basically clones with slightly different numbers and different flavour text. We decided our stand-in enemy, the LOVE und PANZER tank model, should be our boss battle (we decided to have a boss battle!). This ended up also being hilarious. 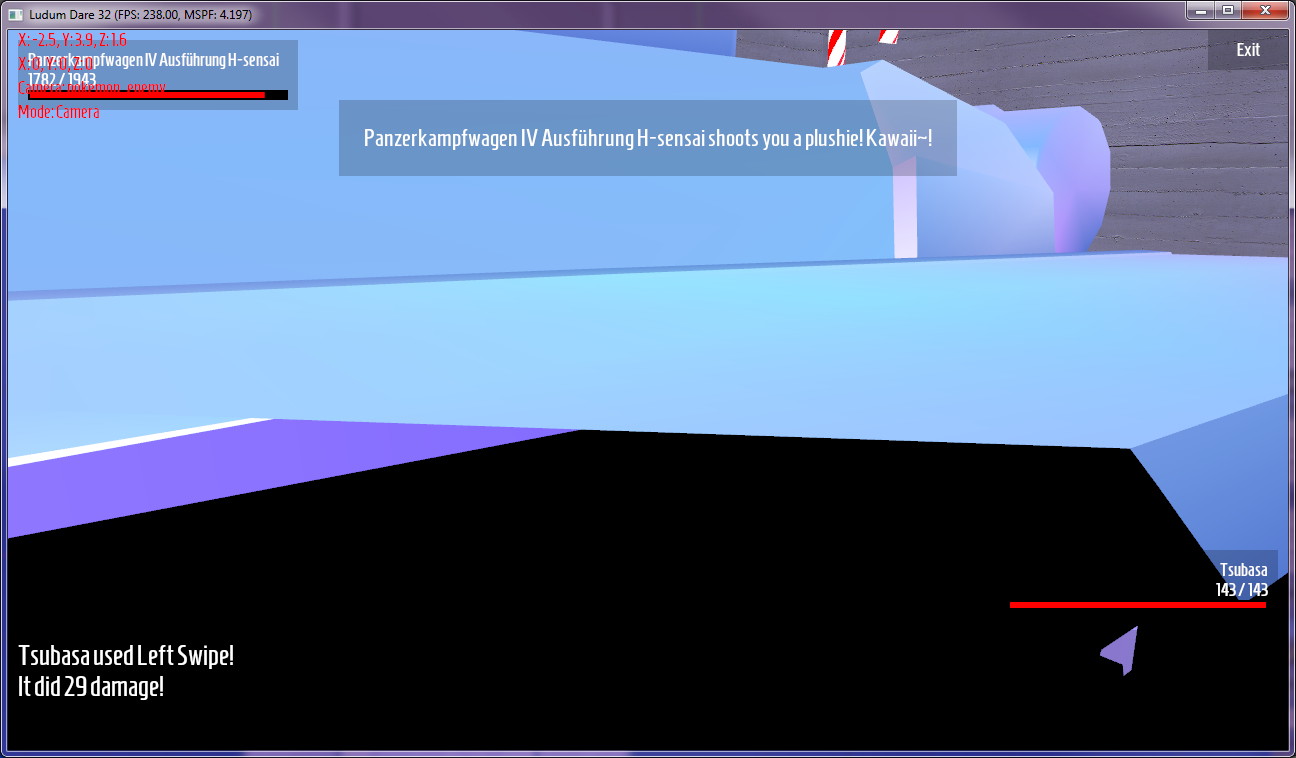 Our very last task was to hastily improve our keymappings. We wanted the game to be playable with both keyboard and mouse but we neglected keyboard navigation until the final seconds and nearly gave up to submit it when Colby found the bug we were having, fixed it, and all was perfect.

We signed off on the game about 15 minutes into the submission period and submitted it shortly thereafter. All-in-all, we had a blast. We proved to ourselves that we were able to pull through and now we have a long list of improvements we can make to our tools for the next Ludum Dare! 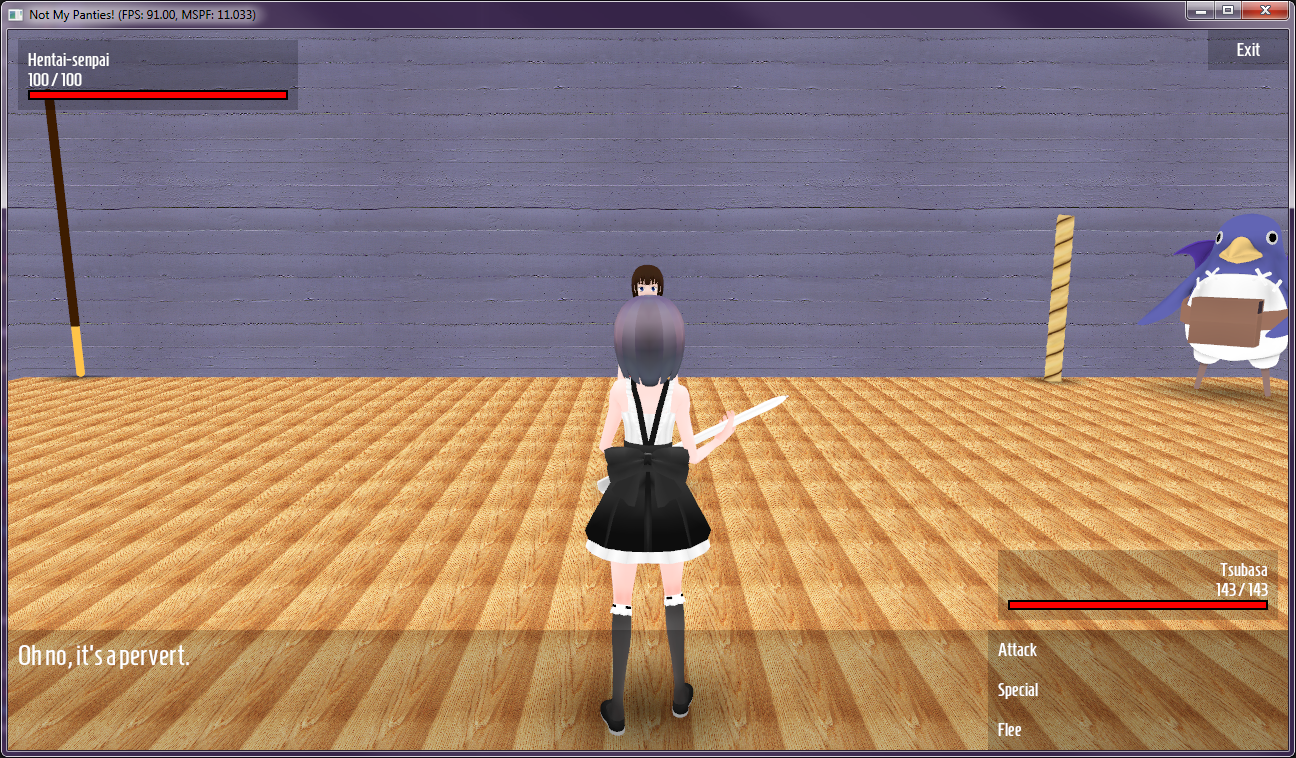 You can check out our entry on Ludum Dare, itch.io, or GitHub!